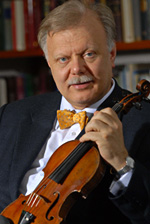 Considered one of today’s preeminent violin pedagogues, violinist KURT SASSMANNSHAUS holds the distinguished Dorothy Richard Starling Chair for Classical Violin at the University of Cincinnati College-Conservatory of Music (CCM). His students include prizewinners of major international competitions, prominent soloists and chamber musicians, and orchestra leaders around the world. Many of them hold important faculty positions in European, Asian, and American Conservatories.

In September 2004 Sassmannshaus premiered the not-for-profit web site www.violinmasterclass.com, a groundbreaking internet site offering free video instruction on all aspects of violin playing.  With more than 20 million hits annually this web site made him the most widely effective and globally recognized violin teacher in the history of violin teaching.  According to London’s Strad Magazine, he is the “King of the online violin tutorials”. The latest offerings on this site are live online lessons by Sassmannshaus and many of his colleagues.  “Access to the best violin instruction has always been a matter of geography and financial ability. Now you can live in Kenya, Peru, Malaysia, or New York and get excellent instruction – this website makes geographical distance and cost of travel irrelevant.”

In 2005 Sassmannshaus founded the Great Wall International Music Academy in Beijing, a summer festival for young string soloists, now in its seventh year.  (www.greatwallacademy.org)  60 select students from China and from around the world take lessons, rehearse, and perform in an ideal setting.  They are taught by an international faculty, including the American String Quartet and key faculty form major Asian, European and American Schools.

In addition to teaching an international class of conservatory students, Sassmannshaus is renowned for his method of training extraordinary young talent.  In 1987, he founded the Starling Preparatory String Project as an integrated pre-collegiate program for talented young string players. This program has earned a worldwide reputation for its unsurpassed offering of performance opportunities for young soloists, especially in the Starling Chamber Orchestra, which Sassmannshaus conducts.  The orchestra has appeared throughout Europe, Korea, China, and at New York’s Lincoln Center and received rave reviews for their recordings and live performances.  The orchestra was featured on the syndicated Public Radio International show “From the Top,” and has been the subject of feature articles in The New York Times and Washington Post.

After receiving his bachelor’s degree from Cologne, where he studied with Igor Ozim, Sassmannshaus received a Master’s degree from the Juilliard School as a scholarship student of Dorothy DeLay.   He won first prize in the International Chamber Music Competition in Colmar, France.  He taught at the University of Texas, Austin and at Sarah Lawrence College before joining CCM full time in 1983.  He has also been named guest professor at the Beijing Central Conservatory of Music.

Sassmannshaus has taught master classes in Europe, the United States, Japan, Korea, China, and Australia and is a frequent judge in international violin competitions.